Farmed by the Durden family, Cherokee Rose Vineyard is a small, single-variety vineyard in Comfort, Texas. Grower and Kendall County Commissioner Don Durden and Bending Branch Winemaker Dr. Bob Young have been longtime friends and served together as board members on the Comfort Area Foundation.

If Dr. Young's first love is Tannat, his second may be Malbec. The first productive harvest of Cherokee Rose Vineyard was in 2017 – the best harvest year on record in Texas. All of the Malbec went into two barrels, one neutral and one new American.

During tasting trials, the Bending Branch team was very pleased with this Malbec. The Malbec in the new American oak barrel from the A.P. John Copperage was superior, though, and deserved it's own stage. From that moment, the team began working on a new label and planning its future as a Reserve wine. With only 23 cases produced, 5 cases would be preserved in the library, and the remaining cases would be allocated for the 1840 Custom Case Club. 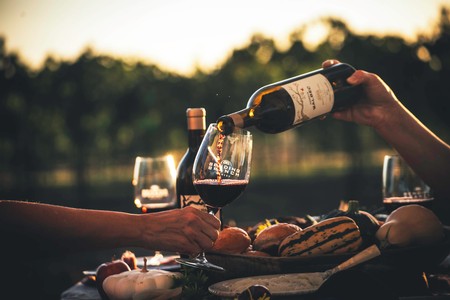 So what happened to the other barrel? After the wine was bottled, it sold out in one transaction. Commissioner Durden secured it all.

The 2017 Malbec Reserve from Cherokee Rose Vineyard is laced with scents of cigar box and mint. There are concentrated flavors of pie cherries, red plum, and dark chocolate. It was recently described as having a taste of mushroom umami. The new American oak lends complex spice and vanilla.

Want to try it? Join the 1840 Custom Case Club and include it in your September release order.

I tasted it during the trial that led to its reserve label and again a couple of weeks ago. All I can say is that I've already included it my 1840 Custom Case Club order.